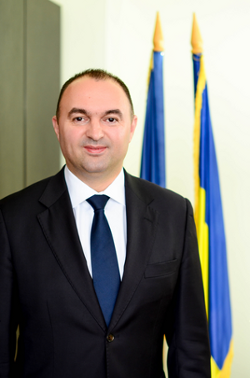 His first elective office came in 2004, when he joined Iaşi County Council. Later that year, he left his seat on the council when he was elected as a Member of Parliament. Additionally, he was the Minister of Education in the Romanian Government from April 2007 to October 2008. As former Minister of Education, he initiated and coordinated a new education law and, under his mandate, he managed the largest public investments since 1990 in Romanian schools rehabilitation.

He was for 2 mandates elected as MP where he served on various committees: public administration, land management, education, science, youth and sports; European affairs, European integration, industries and services, relations with UNESCO.

In June 2012, he was nominated as candidate for President of Iasi County Council and he won the elections. He promised that he would grapple with significant economic development challenges on skills, productivity and employment of Iasi County.

Driven by his vision to turn Iasi into a business hub, he started a radical administrative campaign around one strategic objective: the International Airport. Less than 6 months after winning the elections, more than EUR 31 million of the County’s own budget were tendered in the building of a new flexible runway, with a total length of 2400 m.

Now, Iasi County is keen to attract foreign investors based on the increase of life-quality, openness and pro-active attitude towards opportunities coming from all over the world (Israel, EU, China, Japan, USA etc).